How To Protect Your Trademark When Selling Internationally

Imagine you put your blood, sweat and tears into developing, manufacturing, and marketing a new product. After a while, the product takes off, and the money begins rolling in. You’re on top of the world! But then, you start spotting knock-offs of your “baby” online and you feel powerless to stop them.

The Consequences of Not Filing International Trademarks

This scenario described above happens more often than you might think, and illustrates the importance of trademarking when selling, or intending to sell, internationally. But simply stealing your idea may not be the worst of it.

Most knockoffs are made of lower-quality materials and are priced significantly cheaper. So, unsuspecting consumers purchase these counterfeit products expecting the quality that’s associated with your brand, only to receive an inferior product. So, not only are these low-quality knockoffs taking from your bottom line, they’re making your product look bad!

In addition, many sellers hawking knockoffs on eCommerce platforms are not located in the U.S. and are unidentifiable, making infringement easy for them to get away with. And, once a seller is reported and removed from a site, there is nothing to stop them from creating a new online identity and starting back up again. If a company tries to attack each infringing use via traditional methods, it can quickly get expensive.

Failure to file a trademark internationally can also result in trademark squatters. Trademark registrations in many countries, including the United States, are publicly available. So, it’s not uncommon for infringers, or “trademark squatters”, in foreign countries such as China to be on the prowl for U.S.-based trademark registrations. When they find one, they may quickly file the same one in their home country. Then, when the U.S. company looks to enter their market, they find that their trademark is already taken. At this point, they only have three options, none of them very appealing:

This all sounds very unfair – even a bit like extortion – but unfortunately, it’s all perfectly legal. So, it’s best for companies that intend to expand internationally to apply for trademark registrations as soon as they identify the countries of interest before a squatter beats them to the punch.

Registering a domain name is inexpensive and can easily become profitable for infringers. They simply register a common misspelling of a trademark that causes a significant number of customers to be diverted to the registrant’s webpage.

They may also use pay-per-click ads to drive traffic to their site. In doing so, their ad rises to the top of the results in a Google search, and the similar-looking domain name causes confused users to click, taking them to the knockoff company’s site.

How To Protect Your Trademark Against Infringers

While a United States trademark may not protect you outside our country’s borders, U.S. Customs and Border Protection can be an excellent resource for blocking counterfeit goods imported into the U.S. Once a company has a federal trademark registration, the registration can be recorded with the U.S. Customs and Border Protection. Then, the trademark registration is available to customs inspectors at all entry ports in the U.S., where they can search for incoming products that infringe on your registered mark.

Of course, you want to also protect your trademark outside of the United States. So, how to register an international trademark quickly and efficiently? Unfortunately. there are nearly 200 countries in the world, and most have their own trademark registers, application procedures, and associated costs, making this a very expensive undertaking for all except the largest multinational corporations. The best way, then, for a trademark owner to protect itself from these dangers is by registering its marks in as many jurisdictions as possible.

Since registering a trademark in dozens of countries is not possible for small and growing businesses wanting to protect themselves, there are five things company leaders should identify:

If you can afford one, an international trademark lawyer can be of great assistance with these matters.

Examples of Companies That Effectively Protected Their Trademark

The 3M company filed a successful lawsuit against Changzhou Huawei Advanced Material Company for the use of 3N, stating it suffered significant damages from the similarity of the mark. It was ruled that despite some dissimilarities in products and pricing, the distinctiveness and reputation of the 3M mark – and the fact that 3N had managed to acquire clients and market share by use of the similar mark – constituted infringement.

Even though Louis Vuitton Dak is a South Korean fried chicken restaurant, they still lost a trademark battle with clothing designer Louis Vuitton. The court ruled that despite the products being wildly different, the name, packaging, and logo of the restaurant were too similar to the iconic designer. The restaurant was subsequently hit with another $14.5 million fine for non-compliance after changing their name to LOUISVUI TONDAK following the initial ruling.

Sometimes, a popular brand gains multiple infringers, and a suing company can cost-effectively lump numerous defendants together into one lawsuit instead of filing multiple lawsuits against a single knockoff seller. Generally, the defendants do need to use the same factory or be a single entity masking itself as multiple sellers. Such as the case with Oakley, which filed a complaint that an “interrelated group of infringers” were operating online stores under different aliases resulting in billions in economic losses. Oakley ultimately won the case, and each defendant was put on the hook for $100,000 in damages.

Go International with The Fulfillment Lab

More than $500 billion is lost to counterfeiting every year – 3.3% of world trade – making trademarks one of the most important assets of any company. Always be sure to protect your products and your brand name with a trademark. And, when you’re looking to take your eCommerce business global, always turn to The Fulfillment Lab. Our Global Fulfillment Solution™ combines the people, processes, and software you need to perform global fulfillment efficiently and effectively.

We offer international shipping that reaches your customers quickly and with full visibility from 14 facilities around the world. While we recommend speaking with a trademarking expert when selling internationally, we do understand export compliance, country rules and regulations, tracking, insurance, taxes, customs, and a whole lot more. Learn more about our global fulfillment operations today.

How to Build Brand Awareness with Customized Order Fulfillment 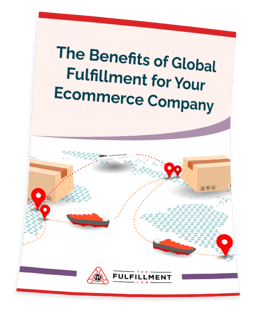 Learn about the benefits of international selling in our FREE ebook. Enter your email below to get your copy.